What is the true meaning of vendetta?

Originally, a vendetta was a blood feud between two families where kinsmen of the victim intended to avenge his or her death by killing either those responsible for the killing or some of their relatives. The responsibility to maintain the vendetta usually falls on the closest male relative to whoever has been killed or wronged, but other members of the family may take the mantle as well. If the culprit had disappeared or was already dead, the vengeance could extend to other relatives.

Vendetta is common in societies with a weak rule of law (or where the state does not consider itself responsible for mediating this kind of dispute) where family and kinship ties are the main source of authority. An entire family is considered responsible for whatever one of them has done. Sometimes even two separate branches of the same family could come to blows over some matter.

The practice has mostly disappeared with more centralized societies where law enforcement and criminal law take responsibility of punishing lawbreakers.

In ancient Homeric Greece, the practice of personal vengeance against wrongdoers was considered natural and customary: "Embedded in the Greek morality of retaliation is the right of vendetta... Vendetta is a war, just as war is an indefinite series of vendettas; and such acts of vengeance are sanctioned by the gods".[5]

In the ancient Hebraic context, it was considered the duty of the individual and family to avenge evil on behalf of God. The executor of the law of blood-revenge who personally put the initial killer to death was given a special designation: go'el haddam, the blood-avenger or blood-redeemer (Book of Numbers 35: 19, etc.). Six Cities of Refuge were established to provide protection and due process for any unintentional manslayers. The avenger was forbidden from harming the unintentional killer if the killer took refuge in one of these cities. As the Oxford Companion to the Bible states: "Since life was viewed as sacred (Genesis 9.6), no amount of blood money could be given as recompense for the loss of the life of an innocent person; it had to be 'life for life'" (Exodus 21.23; Deuteronomy 19.21)".[6]

According to historian Marc Bloch:

The Middle Ages, from beginning to end, and particularly the feudal era, lived under the sign of private vengeance. The onus, of course, lay above all on the wronged individual; vengeance was imposed on him as the most sacred of duties ... The solitary individual, however, could do but little. Moreover, it was most commonly a death that had to be avenged. In this case the family group went into action and the faide (feud) came into being, to use the old Germanic word which spread little by little through the whole of Europe--'the vengeance of the kinsmen which we call faida', as a German canonist expressed it. No moral obligation seemed more sacred than this ... The whole kindred, therefore, placed as a rule under the command of a chieftain, took up arms to punish the murder of one of its members or merely a wrong that he had suffered.[7]

A Kasbah in the Dades valley, High Atlas. Historically, tribal feuding and banditry were a way of life for theBerbers of Morocco.[citation needed] As a result, hundreds of ancient kasbahs were built.

Rita of Cascia, a popular 15th-century Italian saint, had been canonized by the Catholic Church due mainly to her great effort to end a feud in which her family was involved and which claimed the life of her husband.

The blood feud has certain similarities to the ritualized warfare found in many primitive tribes. Thus, for instance, more than a third of the Ya̧nomamö males, on average, died from warfare. The accounts of missionaries to the area have recounted constant infighting in the tribes for women or prestige, and evidence of continuous warfare for the enslavement of neighboring tribes such as the Macu before the arrival of European settlers and government.[8]

In Japan's feudal past the Samurai class upheld the honor of their family, clan, or their lord by katakiuchi (敵討ち), or revenge killings. These killings could also involve the relatives of an offender. While some vendettas were punished by the government, such as that of the Forty-seven Ronin, others were given official permission with specific targets.

At the Holy Roman Empire's Reichstag at Worms in 1495 the right of waging feuds was abolished. The Imperial Reform proclaimed an "eternal public peace" (Ewiger Landfriede) to put an end to the abounding feuds and the anarchy of the robber barons and it defined a new standing imperial army to enforce that peace. However, it took a few more decades until the new regulation was universally accepted.[9] In 1506, for example, knight Jan Kopidlansky killed a family rival in Prague and the Town Councillors sentenced him to death and had him executed. Brother Jiri Kopidlansky revenged himself by continuing atrocities.[10] Another case was Nuremberg-Schott feud in which Maximilian was forced to step in to halt the damages done by robber knight, Schott.

In Greece the custom of blood feud is found in several parts of the country, for instance in Crete and Mani. Throughout history, the Maniots have been known by their neighbors and their enemies as fearless warriors who practice blood feuds, known in the Maniot dialect of Greek as "Γδικιωμός" (Gdikiomos). Some vendettas went on for months and sometimes years. The families involved would lock themselves in their towers and when they got the chance would murder members of the opposing family. The Maniot vendetta is considered the most vicious and ruthless; it has led to entire family lines being wiped out. The last vendetta on record required the Greek Army with artillery support to force it to a stop. Regardless of this, the Maniot Greeks still practice vendettas even today. Maniots in America, Australia, Canada and Corsica in France still have on-going vendettas which have led to the creation of Mafia families known as "Γδικιωμέοι" (Gdikiomeoi).[11]

Vatheia, a typical Maniot village famous for its towers

In Corsica, vendetta was a social code that required Corsicans to kill anyone who wronged the family honor. Between 1821 and 1852, no less than 4,300 murders were perpetrated in Corsica.[12]

The Basque Country in the Late Middle Ages was ravaged by the War of the Bands, bitter partisan wars between local ruling families. In Navarre, these conflicts became polarised in a violent struggle between the Agramont and Beaumont parties. In Biscay, the two major warring factions were named Oinaz and Gamboa. (Cf. the Guelphs and Ghibellines in Italy). High defensive structures ("towers") built by local noble families, few of which survive today, were frequently razed by fires, sometimes by royal decree.

Leontiy Lyulye, an expert on conditions in the Caucasus, wrote in the mid-19th century: "Among the mountain people the blood feud is not an uncontrollable permanent feeling such as the vendetta is among the Corsicans. It is more like an obligation imposed by the public opinion." In the Dagestani aul Kadar, one such blood feud between two antagonistic clans lasted for nearly 260 years, from the 17th century till the 1860s.[13] 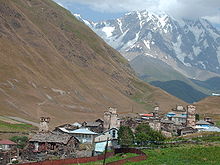 The Celtic phenomenon of the blood feud demanded "an eye for an eye," and usually descended into murder. Disagreements between clans might last for generations in Scotland and Ireland. The Clan Gordon was at one point one of the most powerful clans in middle Scotland. Clan feuds and battles were frequent, especially with the Clan Cameron, Clan Murray, Clan Forbes, and the Chattan Confederation.

Due to the Celtic heritage of many whites living in Appalachia, a series of prolonged violent engagements in late nineteenth-century Kentucky and West Virginia were referred to commonly as feuds, a tendency that was partly due to the nineteenth-century popularity of William Shakespeare and Sir Walter Scott, both of whom wrote semihistorical accounts of blood feuds. These incidents, the most famous of which was the Hatfield–McCoy feud, were regularly featured in the newspapers of the eastern U.S. between the Reconstruction era and the early twentieth century, and are seen by some as linked to a Southern culture of honor with its roots in the Scots-Irish forebears of the residents of the area.[14] Another prominent example is the Regulator–Moderator War, which took place between rival factions in the Republic of Texas. It is sometimes considered the largest blood feud in American history.[15]

An alternative to feud was blood money (or weregild in the Norse culture), which demanded payment of some kind from those responsible for a wrongful death (even an accidental one). If these payments were not made or were refused by the offended party, a blood feud would ensue.